About the music of “Bright Weaving”

Posted on November 15, 2014 by Deborah Meghnagi 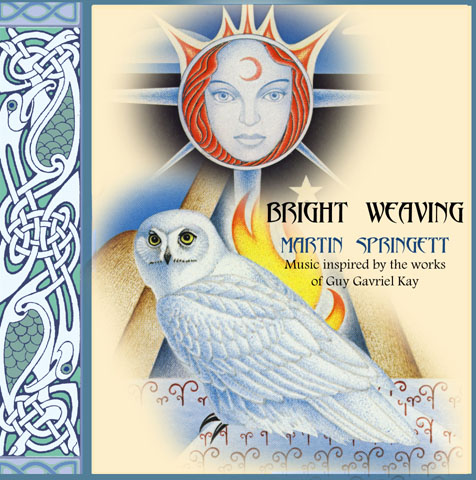 I wrote my first piece of Guy Kay-inspired music after the publication of The Summer Tree twenty years ago. It was a setting of Rachel’s song, which graced this site until fairly recently, so it seems fitting that this collection of music should be a celebration of the anniversary of Fionavar, and my friendship with Guy and a homage to all these wonderful stories. Some years ago Guy wrote an inscription for me in my copy of The Lions of Al Rassan: “To Martin, another place to go”. It is my sincere hope that the music will indeed take the listener on a journey to many different places.

A spoken word introduction, the poem is attributed to St Patrick. It seemed a perfect way to begin. This occurred to me after I had finished reading The Last Light of the Sun, so in fact it was the last piece to be recorded. “I arise today”- this one phrase seems to me to sum up a certain view of one’s place in this world, that we are all part of these primal movements. What can I make of this day, and what awaits me. I am born.

I arise today,
Through the strength of heaven
Light of Sun
Radiance of Moon
Splendour of Fire
Speed of Lightning
Swiftness of Wind
Depth of Sea
Stability of Earth
Firmness of rock.
I arise today.

This definitely connected me with the world of The Last Light of the Sun, a perfect “book end”. The “choir” is my voice recorded on at least twelve tracks, a wide primal sound that evokes the gift of a new day’s dawn.

This is an ode to all the sensual qualities that inhabit Guy’s stories. I’m not sure if there is in fact a description of Shirin’s Dance in The Sarantine Mosaic, but we are certainly aware of her powers of seduction. Some of the music on the CD is quite specific to a person or event, but this is more a homage to an important part of the Kay universe, and everyone else’s I hope. The music is an echo of my love for flamenco, which of course contains that beautiful cross current of Moorish and Spanish cultures.

These four pieces make up a tone poem that reflects the mood and atmosphere as you walk through the Gardens of Al-Rassan. Maryem Toller’s voice is the emotional thread that connects these four short journeys. I kept hearing a voice as I was recording, but it certainly wasn’t mine! An echo of the cultures that flourished together in Spain in the 13th Century; Moorish, Christian and Jewish.

Dianora has touched me more than any other character in Guy’s novels, I must confess. Her character is defined by war and loss and tempered by love. Her anguish as a woman in a male world, her love of the man who placed the knife in her soul, and the vengful act that she knows will finally extinguish her soul if she acts upon it. ( All these thoughts were with me when I felt I had to write something. I knew it should definitely not be a song with lyrics, it had to be something for the listener to wander through, nothing pinned down.) I always knew that I had to have a cello as the main melodic voice, and I was very lucky to meet Allyssa Wright, who because she has played many different kinds of music, didn’t just play “the dots”, but allowed the melody to breathe with a human ebb and flow. For those who are interested, I recorded the guitar in one take, and apart from the harmonies, Allyssa also captured her cello part on the first take. This is rare.

Painted Feet is most definitely Kay inspired, firstly by The Lions of Al-Rassan, and then I suppose a “subtext” from Sarantium, the idea of life being a fleeting thing, sometimes captured through art. The dancers dance becomes a memory, beautiful but transient, the sands she dances on shift and change. I started working on it while reading Lions, and as these things normally go, I didn’t do a good recording of it till I was reading Sarantium, so they merged in my head.

It will come as no surprise to those who know my visual art to hear that I tend to have images in my mind as I come up with tunes, themes and arrangements. This is especially true here with the Fionavar Suite, parts 1 and 2. I have no desire to replace the listeners imaginings with my own, but these pieces are as close to a “soundtrack” as I can come. My hope is that it will remind you of the books as a film soundtrack will recall a scene in a movie.

I’ve had many years of noodling away on this particular topic, and have written more inspired by the trilogy than I have for any of the other GGK novels. But none of those early pices are here. Everything in the suite is new, there is an echo of “Rachel’s Song” in “Rachel ( Paul’s Vision), but as I was working I found a new well of inspiration. I couldn’t resist it, and I found myself re-reading the books, and getting too excited, and in some trouble, as I had to scrap twenty minutes of music and return to the studio. Inspiration of course always strikes when you least expect it, never turn it away. I was reading The Last Light of the Sun during all this, and the weaving together of these different stories was having a profound effect on the outcome of the CD as a whole. The only song included in this section is “Midsummer’s Eve”. I wanted to write something about Kevin, but felt I needed to come to this powerful scene from a different angle. Writing something literal about his sacrifice “freely given” didn’t appeal to me. I think it would have altered the tone of the suite, some of the mystery would have evaporated. I needed a parellel story, an echo. I found it in the lyric for a traditional folk song. This ties in in all kinds of ways: the celtic roots of the words, Guy’s story and the call of the bride for a husband. I hadn’t planned on singing anything on the CD, but this woke up my pleasure for singing again, which was a very positive change as it lead to the final song of the project. With “The Return,” our travelers to another world are back in their own world, with new gifts to share and new strengths, but with the bittersweet taste of exile from something extraordinary.

My daughters Rebecca and Miriam have been playing this lovely Renaissance piece for some years. It seemed a perfect fit in it’s placement on the CD, after all the drama of Fionavar, and just before the rough tale of The Last Light of the Sun. The two flutes unaccompanied also point to the fragility of artistic endeavours.

“The Last Light of the Sun”

Creating this piece lead to one of the best experiences I have ever had in the studio. Guy had given me a copy of the new novel when we had a lunch at our favorite spot, The Bloor Street Diner, which is of course on Yonge St, and I had immediately noticed the poem at the beginning of the book. (When I see naked verse like that, my instinct is to set it to music; I’ve been doing this ever since I first picked up the guitar.) I started working on setting the poem before I read the book: these are powerful images and I had to get going. The tune appeared on my first attempt at singing the words. I knew this place. I have walked the rather eerie Romney Marshes and pebble beaches of south east Kent in winter and heard the call of the Barnacle Goose. I needed to keep the harmonic structure primal and earthy. The song had to move rhythmically though: I needed thundering rhythms. That thunder was supplied by my good friend Penner MacKay playing his own designed and built kodo drums. These drums are made out of huge wine barrels and are an awesome sound. The original drum track was called, oddly enough, “Dragon Rider” so it was a perfect fit. When it came time to do the final vocal I was well into
Last Light, and the story lit up my singing: I was there. It was an incredible experience singing over all that thunder ! Then adding Chris McKhool’s violin was the icing on the cake, hearing that haunting celtic melody at the end when we had finally finished everything was a beautiful thing. It’s rare to get that feeling, to get close to the vision I saw and heard in my head. I hope you enjoy the music.

This entry was posted in Music & Verse. Bookmark the permalink.